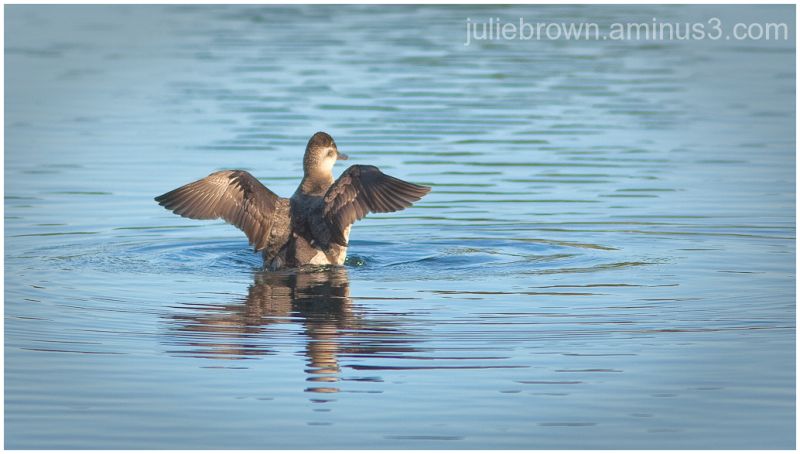 Previous Next
← previous day next day →

Here is a rear view of the Ruddy Duck wing display. The only other North American duck that looks similar is a female black scoter, but its habitat is ocean, not inland ponds like this one.

While searching the internet for information on Ruddy Ducks (Oxyura jamaicensis), I found out that it is an escaped exotic species in the UK and is causing problems for a globally threatened native stiff-tailed duck in western Europe. Ruddy Ducks can produce fertile offspring with the White-Headed Duck (Oxyura leucocephala). The proliferation of these hybrids is reducing the gene pool of the White-Headed Duck. Apparently, the colorful and flamboyant male Ruddy Duck in breeding plumage is more successful at attracting females than is the drab male White-Headed Duck. The link below is to an article on the website of one of Europe's largest conservation organizations, RSPB.

To see my spotlight images, click here .
This photoblog is my nature journal and travelogue. Many of my wildlife images were made in environments impacted by humans. My goal is to feature each animal in a way that allows the viewer to sense the essence of its life in the wild. The purpose of the accompanying narratives is to enhance awareness and appreciation of our natural world, as well as to inspire everyone to protect and care for it.

@Alun: Thanks Alun. As I recall, these ducks were skimming across the water but for some reason I did not get any of that action.

Yes, you are spot on with your research, Canada geese and ruddy ducks almost have "Vermin" status, but the law doen't allow any afermative action, so I guess the will continue to cause problems.

@CElliottUK: Canada geese are a problem in the US as well, but although apparently common, I had never seen a Ruddy Duck. I did see some news items on the internet regarding eradication programs in the UK, but of course that is controversial. I know there are various ways to reduce the reproductive rate of geese without killing them outright-such as removing eggs from nests, but the thought of that makes me cringe. I can hardly kill a bug! Of course this is a major dilemma.

Wow, what a dire situation!..Rather sad, really. These little guys are really "beautifully designed!" I love the wing position showing the very fine details in the feathers...I wonder what the outcome of all of this is going to be?!

@Denny Jump Photo: Non-native plants and animals are a major problem all over the world. Of course, the introduction of exotic species is the work of humans, in their infinite wisdom!

Portrait of Photography from Toronto, Canada

@Sam: Thanks Sam. Glad you read my narrative.

@Phil David Morris: These two ducks are in the same genus, so having viable offspring is the key to the problem.

Very nice image and I appreciate the information!

@Scott F. Schilling: Thanks for visiting and for reading my narrative Scott.

@B. Thomas: Thank you Barbara.